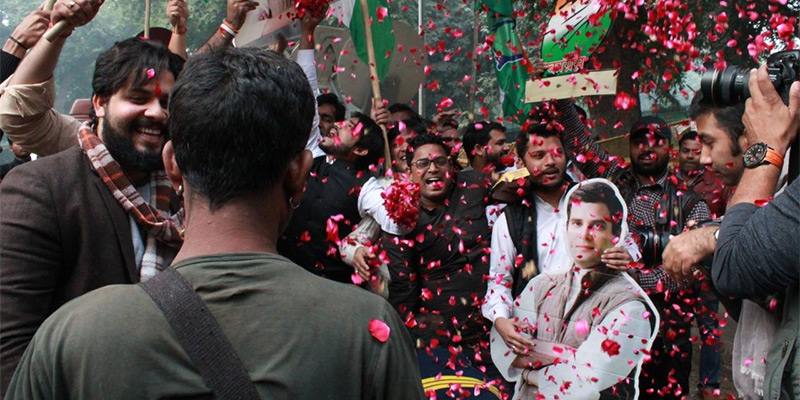 We all are set to witness new dawn in 2019; approximately 100 odd days from now. The nation will again witness the biggest democratic festival in the largest democracy, a constitutional obligation to elect a new government. India is at the crossroad of democracy, a road which will take India to cherish the democratic ideals and the other, to impose a monopoly of a single political entity. The nation is yearning for change, a change which can be brought about only when all of us come together. The months ahead from today are an opportune time for the society and the nation to make a call for 2019. Indian National Congress as a potent political force has become a prerequisite in the prevalent political scenario, where forces inimical to democracy have posed a serious challenge to the very essence of democracy.

An election is a prerequisite to every living democracy as it enables the voters to exercise their franchise and cast their mandate. The vote is a potent weapon of a voter in an election which it uses to express its voice. In a democracy like ours, where first past the post system exists, each vote makes a huge difference, which also underlines the importance of voting. The role of our Election Commission is indispensable in carrying out this fiesta of democracy.

The voters’ awareness is intrinsic to a healthy and participatory democracy; at an age when perception and psyche can be gauged and maneuvered easily with deceit and bogus promises. People being snared with illusionary promises and induced by hyperbole publicity campaign, was what exemplified the 2014 general election. The rationale cannot give away to emotional outburst, which therefore necessitates raising awareness of the voters. The youth tend to be more susceptible to hollow assurances made to them; an issue to ponder over in a nation of ours where around 150 million people in the group of 18-35 would be eligible to exercise their franchise in the 2019 parliamentary elections. The numbers are noteworthy in comparison to 814.5 million people who were eligible to cast their vote in 2014 parliamentary elections.

The countdown has already started for the new dawn for which people and the nation awaits. 2019 election is pivotal at this juncture which if not fought with utmost sincerity could alter the course of the nation wherein the contest is between the truth and the lies. The ruling dispensation utilizing all the machinery at its disposal to impose its narratives upon the nation needs to be thwarted. Past 4.5 years have only inflicted pain and agony in different manifestations. The hopes of the billions have been belied.

A political organization which can sustain the quintessence of our vibrant democracy has become prerequisite,that can carve out space even for the dissention. When you vote, remember you vote for an ideology, philosophy and embodiment of India.

It’s time to rise up and stand for the India we deem to make. The India of our dreams!