Nationalism through the eye of a Pseudo-nationalist 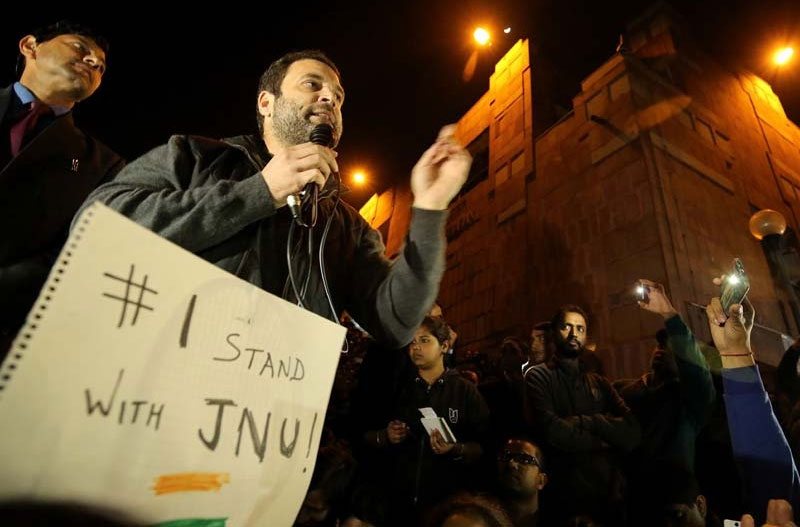 The wave of nationalism in modern India of ‘VIKAS’ oriented government happened after February 9, 2016; When students of Jawaharlal Nehru University held a protest on their campus against the 2001 Indian Parliament attack convict Afzal Guru and Kashmiri separatist Maqbool Bhat. And the media named them Anti-nationalists and Pseudo-nationalists, respectively.

Anti-nationalists, those who are nationalists by birth and support institutions like JNU, and Pseudo-nationalists are those who try to be nationalists but hate institutes, as per the government. Their battle of defining NATIONALISM changed the definition of the national song “Vande Mataram”.

“Vande Mataram”, the national song of India was written by a Bengali poet Bankim Chandra Chatterjee in 1870s. The English translation of the song says

Respect your motherland; that is what Bankim Chandra Chatterjee said. But the pseudo-nationalists had some other meaning in their mind. For them, nationalism is to stand up whenever the words of Vande Mataram comes to their ears. Regardless of knowing the entire song or even at times, without knowing the meaning of the song. They simply destructed the image of nationalism penned-down by Rabindranath Tagore, Bankim Chandra Chatterjee, Mahatma Gandhi Ji and many more.

“I will never allow patriotism to triumph over humanity as long as I live.”
Rabindranath Tagore ( A letter to A M Bose, 1908)

The demons of nationalism had broken down humanity with the sword of pseudo-nationalism. They attacked the institutions, slapped professors and ruled the entire educational pillar of India with the flag of NEW NATION. A nationalism which talks about the killing people if they do not want to say “Vande Mataram”, call them anti-national or Pakistani and ban institutions like JNU is what they believe in.

On February 13, 2016, Indian National Congress President Rahul Gandhi visited the JNU campus to meet students and professors who suppressed down by the ABVP (Akhil Bharatiya Vidyarthi Parishad). In support of them, Mr Gandhi said,

“They do not understand that by crushing you they are making you stronger.”

Students were booked under the act of sedition. But it was an act of freedom of speech if someone said something in a public space, its part of their freedom. Students constitute a major part of the revolution, democracy and progress of a nation. And every student knows the meaning of sedition. The supreme court of U.S accepted people like Johnson who burned the American flag to express their political belief. But here, students of JNU expressed their hate towards the wrong decision in the Afzal Guru case. Even ministers like Ananth Kumar (Union Chemical and Fertilizers Minister) said,

“The protest at JNU is anti-national, and it amounts to betrayal to the country and should be dealt with strictly with strictly. Anyone who raises slogans in favour of Afzal Guru and other terrorists, strict action will be initiated against them,”

There was nothing against the nation. The political parties used the issue to overpower the best institutions to change their education system and syllabus for their propaganda. A well-educated youth cannot listen to the words of propaganda and today’s government has nothing in their hands except propaganda. They will stop free voices, rape the idea of a new nation and kill the freedom of expression. Once you go against their rules, they will start calling you anti-national. Eating beef, not saying VANDE MATARAM, wearing jeans or short clothes and many more were the parts of being an anti-national youth.

“A youngster expressed himself, and the government says he is an anti-national. The most anti-national people are the people who are suppressing the voice of this institution,” Gandhi told students.

If anyone who is speaking in support of Muslims, Dalits and minorities instead of Hinduism is an anti-nationalist, this is the voice of the mob; this is the idea of new India. According to a report,

“Muslims were the target of 51% of violence centred on bovine issues over nearly eight years (2010 to 2017) – and they comprised 84% of 25 Indians killed in 60 incidents. As many as 97% of these attacks were reported after Narendra Modi’s government came to power in May 2014.”
The reality stand is, these elements are themselves not aware of Hinduism as a philosophy and its core principles and that it is not at all against anyone. Hinduism stands for humanity as its first core principle.

Rabindranath Tagore, who wrote the national anthem of India once said about this communal violence under the roof of nationalism.

“Patriotism cannot be our final spiritual shelter; my refuge is humanity. I will not buy glass for the price of diamonds, and I will never allow patriotism to triumph over humanity as long as I live. ”