The Demon of Demonetization 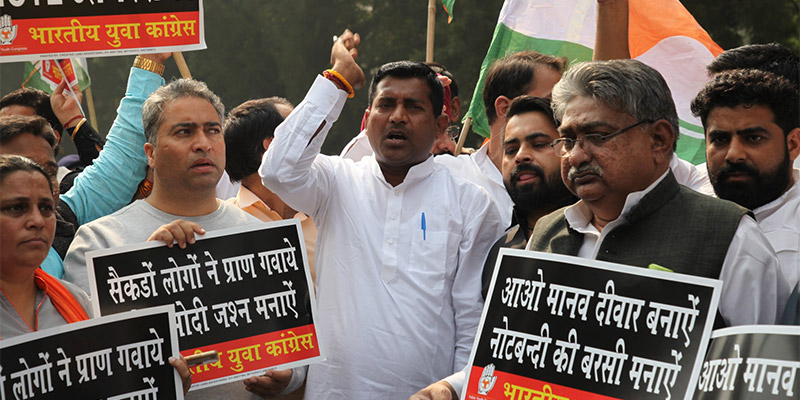 This year on 8th of November, 2018, we marked the 2nd anniversary of Demonetization, the black day in Indian economy and democracy. A decision taken in haste by the present political dispensation only to derive political mileage; camaflouged as panacea of all the ills plaguing the nation. If the reality of the decision is gauged, it only wreaked havoc to the nation and to the common man. To enlist a few, the demonetization rendered 15 crore people unemployed, wiped out lakhs of job, closed thousands of small and medium enterprise units, brought down India’s GDP by 1.5% causing a loss to the tune of Rs 2.25 lakh crores and to the worst claimed the lives of over hundred innocent citizens. To sum up demonetization only imposed indelible pain on the people and the nation at large.

IYC leadership has been crystal clear with this monstrous decision and has categorically stated that it was an ‘organized loot’ and ‘biggest scam’ of India, post-independence. To showcase opposition, IYC under the leadership of National President Keshav Chand Yadav and Vice President Srinivas BV staged a protest outside the (Reserve Bank of India) RBI office on 9th of November 2018.

The pre-conceived goal of PM Narendra Modi’s arbitrary decision of demonetization is vague in itself. If you go by the government it was meant to eliminate black money, check counterfeit currency, make cashless economy and halt terrorism, but two years down the line it turned out to be a mirage. Here’s are the rebuttal to PM Modi’s bogus claim, according to RBI there has been an increase in counterfeit Rs 2,000 currency, which were introduced post demonetization. A Jump of 480% in suspicious transactions has been reportedly detected by the banks.

PM Modi had used the word ‘black money’ multitude of times in his hour-long televised speech, while there was no mention of digitization, cashless economy or income tax. As per the central bank 99.3 % of the banned notes have returned into the banking system whereas the value of bank notes in circulation has increased by 37.7% over the year. This is not the only instance when our PM Modi had been caught fooling the nation.

PM Modi tom -toms of generating employment whereas his own decision of demonization had caused thousands of people to lose jobs that included the poorest of the poor who depended on cash for their daily lives and livelihoods. RBI spent a huge sum of Rs 7,965 crore in the year 2016-17 on printing new Rs 500, Rs 2,000 and other denomination notes, which was more than double the Rs 3,421 crore spent in the previous year. Further a sum of Rs 4,912 crore on printing currency in the year 2017-18(July 2017 to June 2018). These only exemplify folly on part of the Prime Minister and his government.

Demonetization had a left an indelible mark on the economy and nation which would only fade with corrective economic measures, adopted hereafter. To summarize it was a bloomer that had only proved agony to the citizens.